So, as I've mentioned, I've been involved playing keyboard with a cover and a jam band for the past several months. I had been using my Nord Lead 2X's organ mimicry to get some Hammond-ish sounds from it, as well as using the electric piano patches and tweaking them for the stuff we do.

However, I always felt that it was a bit limited in that aspect, and while the other guys did like the sound of the Nord and how it cuts through, I wanted to get something more viable for if/when we eventually start performing outside the basement, and have something a bit more stage friendly. Also, because though I have a number of VA synths, I don't actually have a good "bread'n'butter" keyboard.

I decided on the Roland VR-09. I just wanted a decent stage ready keyboard for under $1000, and this fit the bill nicely. I read a lot about it, and watched a slew of videos and demos before deciding on it. It's a pity I couldn't try it out in person at a shop, but I did try out a few other contenders like the Roland FA-series keyboards. My reasons for deciding on the VR-09 were 1) affordability 2) some dedicated real-time controls 3) physical drawbars 4) decent acoustic samples 5) VA synth engine 6) weight. 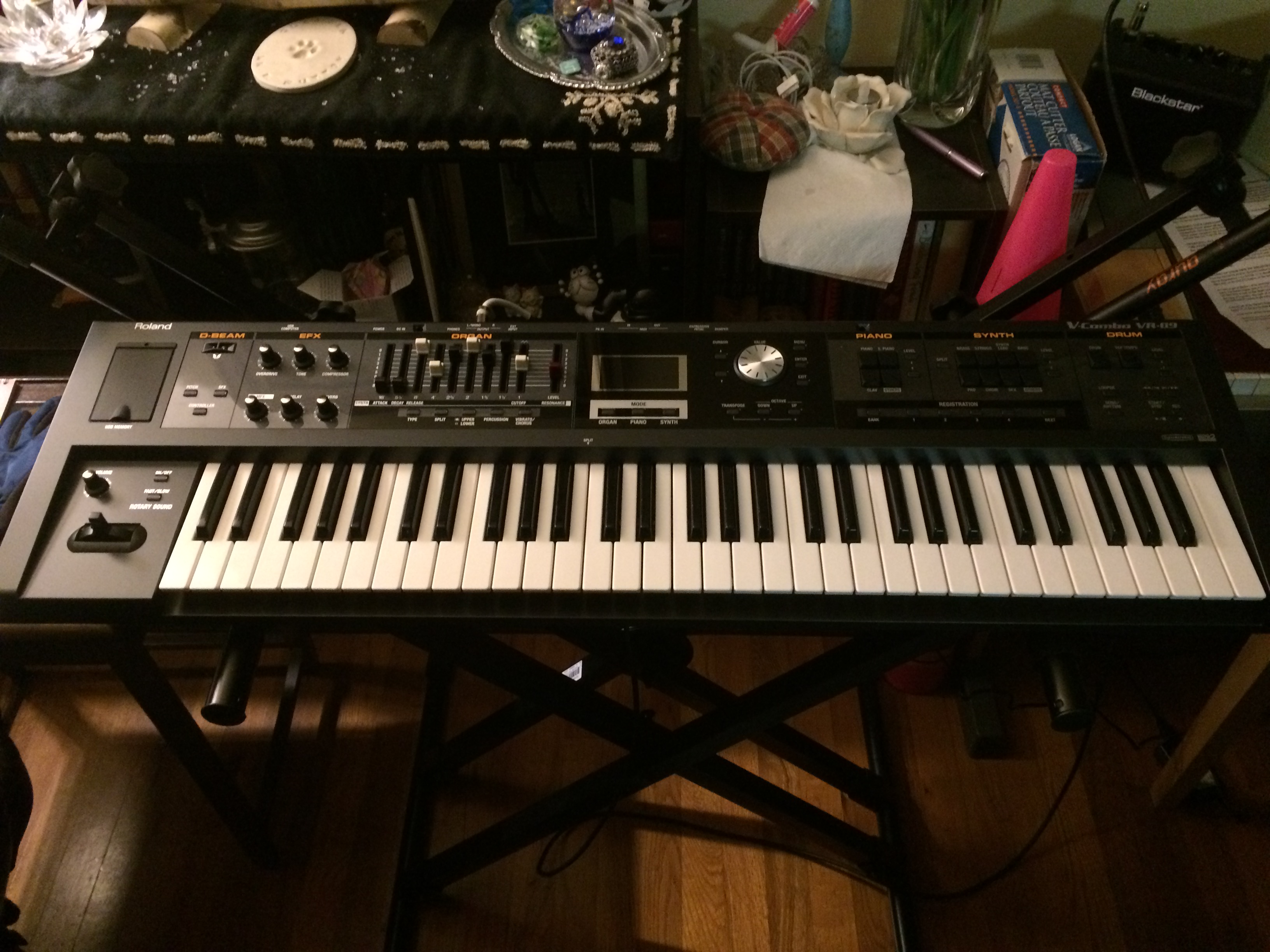 I had looked at the usual suspects like the Hammond SK1, Nord Stage and Electro keyboards, and some others like the Roland FA-series, Korg Krome and Kronos, and Yamaha MX and MOXF series, and while yeah, they kick ass, they're also about 2 to 4 times more than what I was willing to pay at this point. The VR-09 packs quite a bit into a lightweight package. Seriously, the VR-09 weighs the same as my Nord Lead 2X; about 12 Lbs. It is plastic, but it doesn't feel flimsy to me. However, there is a bit of wobble with the drawbars, hard plastic buttons, and a little bit less but still present with the knobs. The rotation of the knobs, press of the buttons, and sliding of the drawbars all feel fine to me, though. But yeah, I highly recommend getting a decent case for hauling it around. My preference are the SKB 3i-series hard shell cases. The 3i-4214-KBD case fits the VR-09 like a glove.

So, after honeymooning with the new keyboard for several hours the day it arrived, I'm very happy with it. Yes it has limitations and it's share of quirks, but it is pretty easy to dial up a sound quickly, it boots quickly, the keybed feels sturdy to me (good organ style action somewhere between synth and semi-weighted) It's not a "great" keybed for acoustic piano (you really need a decent hammer weighted keybed for that) but I still find it expressive enough, and it gets the job done. Setting layers and splits are pretty straight forward. The organ engine is quite good with the Leslie rotary emulation. The piano section has a couple decent acoustic grand pianos, and some good electric rhodes and wurlitzer style sounds. The clavichord samples are "okay". The synth section has some pretty good capability for tweaking as well, and doesn't sound bad. Other acoustic samples, such as string ensembles, brass, solo trumpet, trombone, sax, violin, and cell are also located in the synth section, and sound pretty good. Some of the solo samples are also modeled to simulate some articulation e.g. lip slurs for the solo trumpet.

Outside of the organ section, the drawbars handle basic filter and envelop duty. Effects have a dedicated knob for their levels; overdrive, tone, compressor,dely, reverb, and multi-FX. And the d-beam can be set to control pitch, sfx, or control a parameter (like Leslie rotation speed) Drum section has a number of kits including a few acoustic kits, and all the Roland standards (606, 808, 909, etc.) Though I probably won't use it, the keyboard includes a 20-second looper for overdubbing tracks, as well as recording a full song (though it's not a full workstation like the FA-series, or the Korg or Yamaha equivalents). The USB port is used with a USB stick to access user registrations, update the OS, or export registrations and songs. The VR-09 can also play back mp3 and wav files from a USB stick. (I will probably use this feature to record our rehearsal, throw it on a USB stick, and then play with the band, but not with the band) Basically, it's a jack of all trades, and not a master at anything in particular, but it does a lot of things right for quick access and real-time tweaking and adjusting on the fly. It's affordable compared to the Hammonds, Kurzweils and Nords, and did I mention it's REALLY light and easy to haul to a gig?

Granted this is a first impression, and I've read my fair share of criticisms of the board, and one of the big ones is midi capability. It's a bit limited on that front, and not really a good keyboard for being a master controller in front of your DAW. I think the Effects knobs send CC, but the drawbars do not interface with midi, unless they are sending something like sysex data. Reportedly some expression pedals also don't respond well for controlling an organ swell type of sound. Navigating to the deeper programs within a registration bank is also a slight niggle.

Overall, it's a great sounding board especially in the space of a band, decent feel to the keys, easy to use, easy to transport and carry, easy to set up quickly, and easy to tweak some settings on the fly. It's not a Nord killer, but it's on the right track. I'm having a blast with it, and honestly, I have a hard time keeping my hands off of it. I'll be using the VR-09 on first tier, and my Nord Lead 2X on the second tier for primary synth duty. Some people who already have a decent 88-key stage piano might use the VR-09 on the 2nd tier, but probably not as the primary or sole keyboard, particularly if they perform classical jazz. Though they might take it alone to rehearsals as it's easy to carry and set up. Might also be a good solo board for really cramped or small gigs.

Oh, and I also forgot to mention that it can run on batteries, increasing the portability, and maybe being a good consideration for busking.

UPDATE:
So, I've had the VR-09 for a couple months, and have hauled it to the rehearsals with the cover band and the jam band, and it has held up just fine so far. I attached industrial strength (the kinda you can find at Staples or other office shops) velcro to my stand to hold it in place well while performing.  Sound wise, it has definitely held up very well, and does well in the context of the stuff we do. Mechanically, I still feel the keys are fine, have a good organ feel, and are decent enough to get some expression from acoustic piano and electric keyboard sounds. (hammer weighted is always better for acoustic piano, but it gets the job done) The synth and acoustic basses also put out some serious rumble through the basement's 15's. Throw in a little tonal adjustment and ease in the compression knob, and you've got some good punchy deep bass.

It is a small shame that I have to use my wife's iPad to edit and create new synth patches from scratch, but the editor is easy to work with. I had to create a kind of ethereal pad sound for one of the originals our jam band does, and I was able to coax out a nice warbling synth pad to do the job.   So yeah, still really thrilled with the keyboard.  Hopefully we'll finish filling out the band and be performing soon. (also close to deciding on a band name).